"The Many Sided Window" by Tim Simmons

My friend Tim Simmons recorded this track (with an assist from Marc Schuster) and then assembled some footage he found in the Prelinger Archives to go along with it. It's actually pretty cool how the imagery goes with the music -- kind of like the way Pink Floyd's Dark Side of the Moon goes along with The Wizard of Oz.

"Obstacle" by the DROiDS

I love Electronic Dance Music, but I sometimes worry that it overshadows other forms of electronic music. Case in point: the curiously organic electronic sounds of the DROiDS. Their music blends analog synths with more traditional instruments. I'm pretty sure those are real drums on "Obstacle" (the track below), but even if they're not, by moving beyond the four-on-the-floor beats of EDM, the DROiDs remove us from the pounding rhythms of day-to-day life and deliver us to a quirkier, jazzier state of mind. Which isn't to say that the band doesn't rock when the occasion calls for it. After you've listened to "Obstacle," check out the grinding, gritty blues of "Dive." Offering a cross between Depeche Mode's most recent work on Delta Machine and the classic synth-driven rock of Gary Numan and Tubeway Army, the DROiDs bring heart and soul to electronic pop.

The DROiDS are offering "Obstacle" and all of their tracks at a pay-what-you-want rate, so give it a listen and if you like it, buy it!

Music That's Getting Me Through: "Sickle/Hammer" by Spirits

Maybe I'm betraying my latent socialist sympathies, but I'm so glad that my friend Tom Powers turned me on to "Sickle/Hammer" by Spirits. The track opens with an acoustic guitar line that reminds me of Guster. After four measures, though, the song is pure eighties power pop. I'm thinking XTC meets Crowded House with some gorgeous backing vocals a la the Beautiful South? Some nice, fat synths in there, too. And listen for a wonderful lyrical sentiment at around the two-minute mark: "Harvest the moon. The darkness will digest the light." Good advice for how I'm feeling at the moment.

The track is a pay-what-you want deal, but come on... Throw a dollar their way! If you like it, buy it!

Here's a track I recorded last week. I'm not entirely sure of what it's about, but there are two characters (possibly three), and one of them ends up dead. They may actually be robots. I say this because in the middle of the song, I do some weird things with phrase "rock star" and that part ends with a drawn-out, mechanical sigh. Is the hotrod kitten robot trying to talk the rock star robot out of killing her? At the end of the song, I do some more weird stuff with the phrase "never talk back." If you figure out what it all means, let me know.

Email ThisBlogThis!Share to TwitterShare to FacebookShare to Pinterest
Labels: music

If you've read any of my music reviews, you've probably noticed that I tend to end by saying "If you like it, buy it." A friend of mine recently said that this sounds a little glib, or like I'm trying to tell people what to do and how to spend their money. To an extent, I suppose my friend is right. But the main thing I'm trying to do is to remind anyone who reads my blog that musicians are people who put a lot of time, effort, and, yes, money into recording songs. Sure, we do it because we love making music. In fact, a lot of us have day jobs that help pay for our musical habits, and very few of us expect to make a fortune selling our music, but I think it's important to let artists we like know that we appreciate what they're doing. It's the online equivalent of dropping a dollar (or more!) in a tip jar.

Personally, I'm always flattered when I get a message stating that someone just paid for one of my songs, and I know that other musicians probably feel the same way. It means we've connected with a listener -- and that our music was more than just something playing in the background while they were busy doing something else. So when I end each post with "If you like it, buy it," I mean just that: If you hear a song that you like, show the artist that you appreciate what they've done and drop a dollar or two in their virtual tip jar. You just might make someone's day! 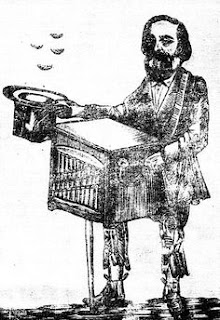